In June of 1999 Susan Jacobs purchased the Jacobson Funeral Home in L'Anse from Dean Jacobson, director and owner of the funeral home since the 1970's. 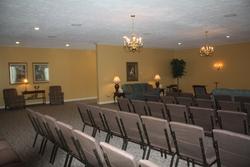